Explaining the rhythm of the FX markets each day

There once was a pundit named Fately
Who asked, is Fed policy lately
A major mistake
Or did Yellen break
The mold? If she did t’was sedately

Please sanction my poetic license by listing Janet Yellen as the primary suspect in my inquiry; it was simply that her name fit within the rhyme scheme better than her fellow central bankers, all of whom acted in the same manner. Of course, I am really discussing the group of Bernanke, Draghi, Kuroda and Carney as well as Yellen, the cabal that decided ZIRP (zero interest rate policy), NIRP (negative interest rate policy) and QE (quantitative easing) made sense.

Recently, there has been a decided uptick in warnings from pundits about how current Fed Chair, Jay Powell, is on the verge of a catastrophic policy mistake by raising interest rates consistently. There are complaints about his plainspoken manner lacking the subtleties necessary to ‘guide’ the market to the correct outcome. In this case, the correct outcome does not mean sustainable economic growth and valuation but rather ever higher equity prices. There are complaints that his autonomic methodology (which if you recall was actually instituted by Yellen herself and simply has been followed by Powell), does not take into account other key issues such as wiggles in the data, or more importantly the ongoing rout in non-US equity markets. And of course, there is the constant complaint from the current denizen of the White House that Powell is undermining the economy, and by extension the stock market, by raising rates. You may have noticed a pattern about all the complaints coming back to the fact that Powell’s policy actions are no longer supporting the stock markets around the world. Curious, no?

But I think it is fair to ask if Powell’s policies are the mistake, or if perhaps, those policies he is unwinding, namely QE and ZIRP, were the mistakes. After all, in the scope of history, today’s interest rates remain exceedingly low, somewhere in the bottom decile of all time as can be seen in Chart 1 below. 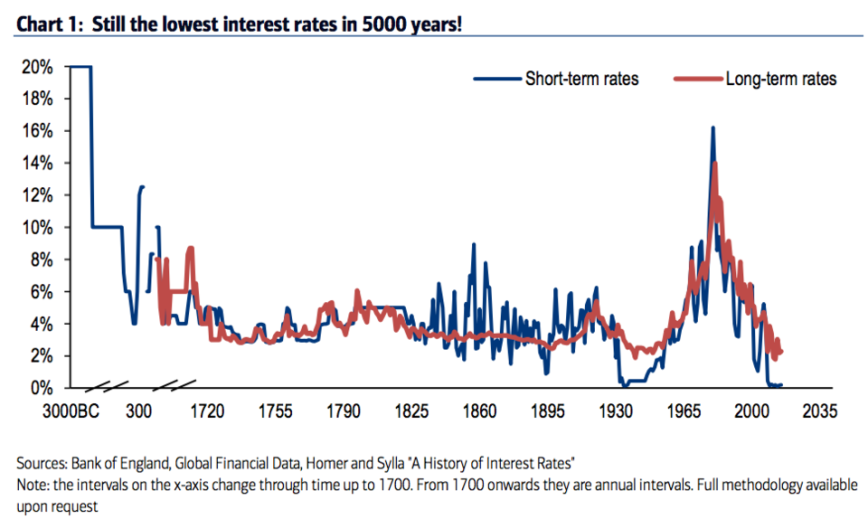 So maybe the mistake was that the illustrious group of central bankers mentioned above chose to maintain these extraordinary monetary policies for nearly a decade, rather than begin the unwinding process when growth had recovered several years after the recession ended. As the second chart shows, the Fed waited seven years into a recovery before beginning the process of slowly unwinding what had been declared emergency policy measures. Was it really still an emergency in 2015, six years after the end of the recession amid 2.0% GDP growth, which caused the Fed to maintain a policy stance designed to address a severe recession?

My point is simply that any analysis of the current stance of the Federal Reserve and its current policy trajectory must be seen in the broader context of not only where it is heading, but from whence it came. Ten years of extraordinarily easy monetary policy has served to build up significant imbalances and excesses throughout financial markets. Consider the growth in leveraged loans, especially covenant lite ones, corporate debt or government debt, all of which are now at record levels, as key indicators of the current excesses. The history of economics is replete with examples of excesses leading to shakeouts throughout the world. The boom and bust cycle is the very essence of Schumpeterian capitalism, and as long as we maintain a capitalist economy, those cycles will be with us.

The simple fact is that every central bank is ‘owned’ by its government, and has been for the past thirty years at least. (Paul Volcker is likely the last truly independent Fed Chair we have had, although Chairman Powell is starting to make a name for himself.) And because of that ownership, every central bank has sought to keep rates as low as possible for as long as possible to goose growth above trend. In the past, although that led to excesses, the downturns tended to be fairly short, and the rebounds quite robust. However, the advent of financial engineering has resulted in greater and greater leverage throughout the economy and correspondingly bigger potential problems in the next downturn. The financial crisis was a doozy, but I fear the next one, given the massive growth in debt outstanding, will be much worse.

At that point, I assure you that the first person who will be named as the culprit for ‘causing’ the recession will be Jay Powell. My point here is that, those fingers need to be pointed at Bernanke, Yellen, Draghi, Carney and Kuroda, as it was their actions that led to the current significantly imbalanced economy. The next recession will have us longing for the good old days of 2008 right after Lehman Brothers went bankrupt, and the political upheaval that will accompany it, or perhaps follow immediately afterwards, is likely to make what we are seeing now seem mild. While my crystal ball does not give me a date, it is becoming abundantly clear that the date is approaching far faster than most appreciate.

Be careful out there. Markets and politics are going to become much more volatile over the next several years.